What better day to clear some photos off my phone than a day when I’m supposed to be writing!

Back in January, I got to travel to the Region 1 Kennedy Center American College Theatre Festival with my ten-minute play The Button. I say “travel” even though it involved getting a ride all the way to lovely Fitchburg, MA. “Team BU” consisted of me, Peter Floyd, MJ Halberstadt, and Michael Parsons. My roommate was the lovely Alex Marshall of Suffolk, and my play was once again dramaturged by the wonderful Brianna Marie Wing of Stonehill. Charlene Donaghy of Lesley, who I met last year, was back again this time around, so it was nice to see a couple familiar faces. I took more pictures this time around because I’m pretty sure I’ve been out of grad school too long to qualify again next year, and I might not get another chance like this. Below are some of my photos and photos taken by friends. Actually, most of them are from friends. 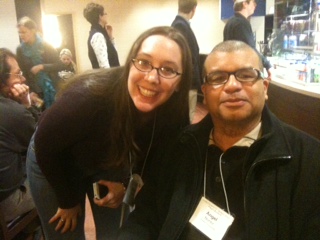 Me with Angel Nunez of Lesley, whose ten-minute play Fragment was one of the national semifinalists. Photo by Kate Snodgrass.

Me with my roommate Alex Marshall, whose ten-minute play The Search was the other national semifinalist. Photo by Kate Snodgrass.

My cast rehearsing The Button. 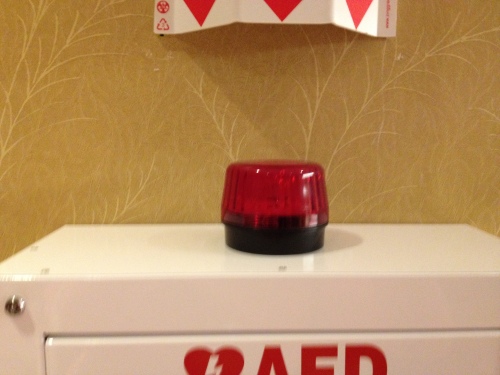 The red button in the hotel lobby.

…And me with the red button. Photo by Brianna Wing.

The set at the opening of Act 1 of Rhinoceros from LeMoyne. Photo by Brianna Wing.

And how it looked in Act 2. Photo by Brianna Wing. 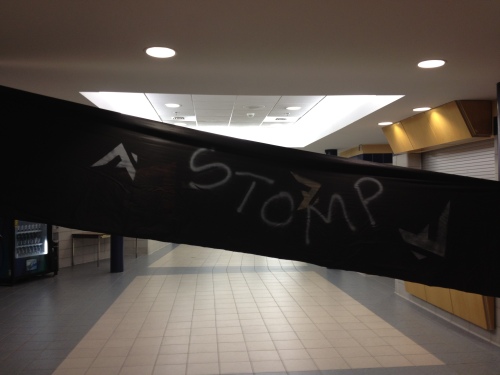 Part of the lobby display from LeMoyne’s Rhinoceros that went up before intermission. Photo by Brianna Wing.

I wish I had a photo from Suffolk Community College’s The Icarus Project, because that was phenomenal. Overall, it was such a fun week where I got to see a lot of great theatre and meet a lot of awesome people, and I’m so happy that I was given the chance to attend.