I’ve been wanting to blog about this for years. Seriously. I’ve just never gotten my act together. But this year I have a play I should be writing, so what better time than now?

So. I’ve been thinking. Rankin-Bass Santas are shits. They are, more often than not, horrible douchebags. What the hell is wrong with them? How is it that kids grow up with these specials every year and still end up thinking that Santa is so jolly and giving? And so without further ado, my ranking of a few Santas, from the best to the biggest asshole ever. 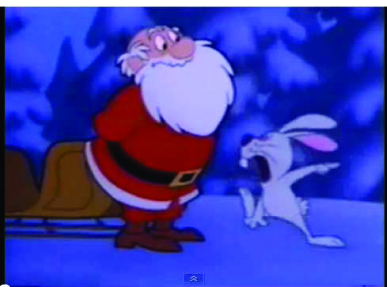 Santa doesn’t play a huge role in Frosty, but when he does appear, he isn’t a very bad guy. Frosty has just melted after being locked in the greenhouse, and Santa brings him back to life. And he even says that maybe (“just maybe mind you”) villain Professor Hinkle will find something in his stocking Christmas morning if he goes home and writes “I am really sorry for what I did to Frosty” a hundred zillion times. Forgiveness! Pretty nice guy all around. Except that I really kind of hate the Frosty special compared to the others. 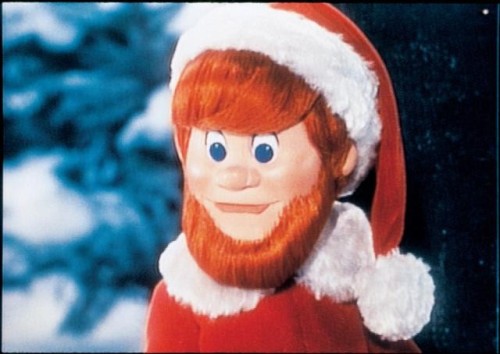 In some ways, this classic Santa is pretty cool. He’s an outlaw, sneaking into a dystopian town to provide joy and love. And also toys. And he hangs around with a penguin, which is pretty awesome. But other than that, he’s just creepy. Check out the ginger-beard. That’s just wrong. And I usually love red hair. And what the fuck is up with this?:

If You Sit on My Lap Today

Apologies for the lack of the actual video. No one on youtube seems to have it. But yeah. Even as a kid the whole “sit on my lap” and “be prepared to pay” thing didn’t sit well with me. Now it’s just disturbing. Come over here, little children, and if you give me a kiss I’ll give you a present. I also have some candy in my car.

A Tad Insecure
Twas the Night before Christmas
I loved this special when I was little. It’s rarely on these days. And when it is on they cut out the song that says “gay” in it. It’s the one where Santa decides not to come to the town of this 70s family: 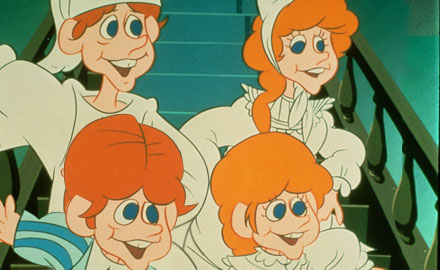 Remember this one yet? No? It also has the mouse family who lives with them. 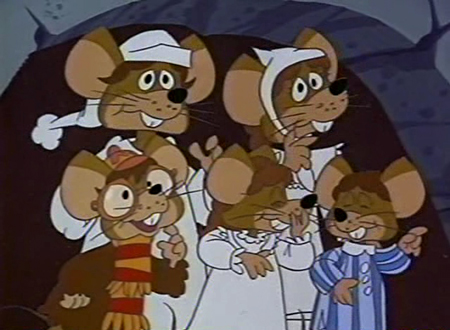 And the little nerd-son in the Gryffindor scarf wrote an open letter to Santa in the paper about how no one believes in him anymore. And he signed it “All of Us.” So Santa acts like a total whiny bitch and returns all the letters everyone in town writes to him. Unopened. So 70s-Dad decides to make a clock tower that will chime and sing the praises of Santa as he’s flying over the town as a way of apologizing and convincing him to reconsider stopping there. Only then the little nerdy mouse breaks the clock when he tries to see how it works, and Santa totally does almost skip right over the town until the little mouse fixes it at the last second. So because one little mouse with an inquisitive mind actually decided to question the notion of Santa, he decides to just blow off the entire TOWN. Good job. Way to make other questioning little mice believe in you.

And he also looks kind of frightening. 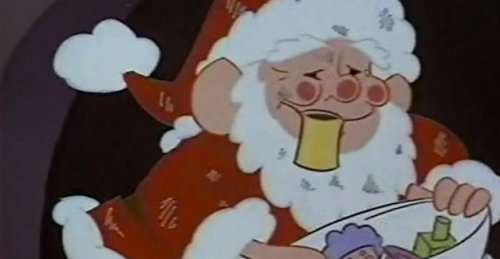 Lazy Ass
The Year without a Santa Claus 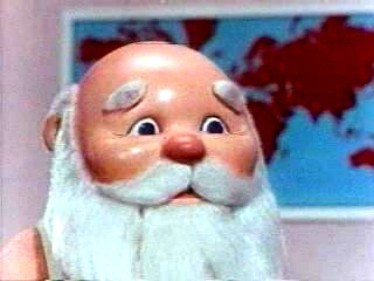 It starts off with yet another whiny-bitch Santa who feels like not enough people believe in him anymore. But he takes it one step further and instead of just skipping over one town, he decides to just take the year off. And bitches about having a cold. He works one day a year. You want people to believe in you? Get off your ass and deliver presents. Maybe stop being so secretive. He only gives in when thousands of letters from sad crying children start pouring in. Ass.

And finally, the absolute WORST SANTA EVER: 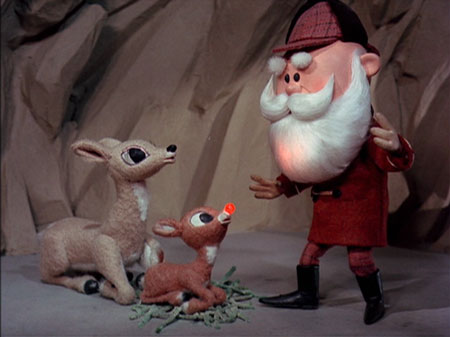 He comes in to meet Rudolph and is all like “what the hell is wrong with the little freak?” and then proceeds to sing a song about how awesome he is and how Rudolph should feel privileged to fly his sleigh IF he can grow up to be normal.

I’ve always hated this Santa. Even as a kid, I knew he was a total douche. As is Rudolph’s dad, Clarice’s dad, Comet the Reindeer Games coach, and the king of the misfits (who won’t let Rudolph and co. stay on the island because they’re not toys). But I expected more from Santa. Although perhaps I shouldn’t have, considering his track record in other specials. And considering that he’s married to this: 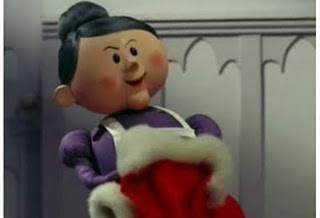 I should’ve known he wasn’t a smart one.

Any other asshole Santas that I’m missing? or any really nice ones who redeem the ones on this list?

Tagged as christmas, christmas specials, frosty the snowman, rankin bass, rudolph, santa, santa claus is coming to town, the year without a santa claus, twas the night before christmas