Hello from the still-largely-shutdown garbage fire that is 2020. (And I say this having had a MUCH BETTER year than many people.) Here’s how the summer’s been going:

Massachusetts is currently in “phase 3” of reopening, so like we have indoor dining with social distancing and I think gyms can be open, but there’s no way in hell I’d go to one.

I DID go to Rudy’s with my mom the other day though. We went right at 5:00 when they opened and got a drink but brought the actual food home to eat. I felt pretty safe… they have two of their four booths open, five small tables in the main dining room, and then two of the four mini-booths in the smaller back room and a couple makeshift tables right at the front are for people just getting drinks. So we had the whole back area to ourselves, and no one was in the main dining area, so we were very spaced out from anyone else, and you keep your mask on till your food arrives.

I wouldn’t want to go during peak hours or stay long enough to eat the whole meal there. I get anxious when there’s too many people around. But even with being careful, I feel guilty whenever I do something remotely social, like I did something wrong or *deserve* to get sick because I had a drink indoors and got a haircut (which I did on July 3, for the first time in almost a year and a half).

I had a very good July 4 weekend, which is funny because smaller holidays like New Year’s and July 4th had historically been sad days for me. There were no Boston Pops fireworks this year obviously… they rebroadcast clips from previous years. But July 5 was one year since I first met Dave, and late at night on July 4 we went outside to make a fire in his fire pit, and this happened: 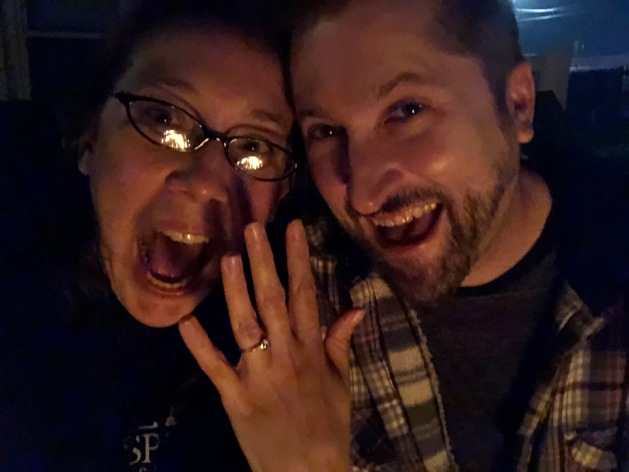 If you like it then you shoulda etc. etc. etc.

I have no idea how to even begin planning a wedding when people are not supposed to gather in groups for the foreseeable future. But it’s not something I want to delay TOO long because I would like to have kids and I’m kind of old. And it’s not like I NEED to be married before kids… it would just be easier to tackle one big life moment at a time. Also my grandmother is 86 and I don’t want to delay things longer than I need to. But I realize that all of these things are very good problems to have, especially in a time that is so isolating and full of uncertainty for so many people.

Being a Playwright When There’s No Theatre

The theatre camp I was writing plays for was officially cancelled. At first they were going to try doing it virtually with a performance over zoom at the end, but the director said the kids weren’t having much fun doing zoom rehearsals in the spring for their other show. But my shows will be able to be used for next year’s camp, which is very cool. I’ll be able to get them all fixed up and polished before the kids start working with them. And I wrote (most of) a play for jr. high/high school kids that is specifically designed for zoom. I kind of need to get the ending on that one hammered out so I can send it places since it’s kind of timely, but I’ve been struggling with writing still. I wish I wasn’t like that. But I have to get better at embracing the type of writer that I am and just letting my process happen rather than beating myself up over it.

I’ve been very lucky to have a relatively good go of things so far during all of this. People in my area are very good about wearing masks and being socially distant, I get to see enough of the people I care about on a regular basis, and I can tailor my writing to suit the needs of this moment. And I have the ultimate “see tons of people I care about in one room” event to look forward to when this is all over.

At my own pace

It’s been a few weeks since my last post, and guess what… I’m still running! I went through a period where I fell out of it for a week and a half when work was going crazy and I also had to get a lot of writing done, but I’m really trying to make this something I stick with. Because of jumping around and missing a few days, I’m on the beginning of week 5 of the beginner program I’ve been doing.

Today’s schedule was 12 min run/1 min walk repeated twice followed by a 4 min run to round out the 30 minutes.  Last Wednesday was when I finally got back to the gym and started up again, and I did an interval of 10 min run/1 min walk twice followed by 8 min run. I was mad at myself for going a week and a half between running days, and I told myself that I had to set the treadmill on 5.0 for my minimal running pace from now on because everyone else at the gym seems to run at 5.5 at the least. I can run at 5.0… when I was doing shorter run intervals I liked that pace because going slower actually felt more difficult. The first 10 minutes were pretty good… I started at 4.6 and bumped it up to 5.0 after two minutes because my previous run had been at 8 min intervals. The second 10 minutes were harder as it got down to the end. I was clock-watching a lot and that always kills me. When I got to final 8 minutes I could feel a blister starting to form on my left foot and a cramp in my hip on that leg, and I practically was speed-walking the final minute and a half.

Then I tried to run again on Thursday even though the plan usually has a walk day in between run days, again because I was mad at myself for being away so long. I was also missing my dad a lot because it was the anniversary of the day he died, and I sort of wanted to run out all of the sad feelings. But I could barely do it. I managed to run for 15 of the 30 minutes, but I had to split it up into 10 run, 10 walk, 5 run, 5 walk. I felt awful. Friday I fell asleep after barely making it through work. It was a rough week.

So today I started off at the beginning of week 5 of the plan, as I said with 12 min run intervals. The muscle aches of last week were gone, and I decided that I probably needed to stop caring about my pace or my calories burned for now and just focus on building up the endurance. The speed will come once I get the endurance there. That’s a problem I always have with anything I approach. I feel like if I’m not absolutely killing myself then I must not be working hard enough. But I ran at 4.6 instead of 5.0 and, big surprise, got through the 12 min intervals much easier than the 10 min ones of last week. It was still a workout, but I wasn’t left feeling like I must be incredibly weak to not be able to handle the plan anymore once I got halfway through it. I put the speed up to 5.0 for the final 4 min run and that felt good. And I still went past the 2 mile mark and got to 2.25-2.30, which is around where I was last time. And I feel like on Wednesday when the interval rises to 13 min, I will be able to handle it.

I need to approach more facets of my life like this. It doesn’t matter that (what feels like) everyone else at the gym runs at 5.5 or 6.0, and it doesn’t matter if they can go that fast and are also beginner runners. Maybe I’m better at dancing or yoga than they are (and if not, then ehhh, whatever, I’ve never been a super-athlete anyway). And if a friend is way more established as a writer than I am, that’s ok and it doesn’t diminish that I’ve made some progress since getting the MFA. It doesn’t mean I should sit there berating myself while I revise until I start questioning whether I’m actually cut out for it. Or if a friend makes more money/owns a house/is married/has a kid/all four of those things, it’s ok that I’m not there yet. It’s ok that I’ve had a couple major challenges in the past few years and have had to take some time working through them. It’s so much more productive to write/live at 4.6 and stay motivated than to force yourself to function at 5.0 and beat yourself up when you’re struggling to maintain it. Now I actually feel like going out and running again next time instead of dreading it. And when I don’t beat myself up about writing, I usually write things that turn out a lot better. Imagine that.

Remind me to take a look back at this post when I start feeling like I’m not doing good enough with life. Remind me that when I’m thinking clearly, these thoughts make sense and that it does not signify my “taking the easy way out.”